The Children's Hospice Crisis, part of a bigger problem....

It was my birthday this week, another turn around the sun and another year I'm grateful to be alive and brimming with plans.

But instead of enjoying a lie in and breakfast cooked by my chef-in-training youngest son, I was up at stupid o'clock, necking a coffee before driving down the A3 to the BBC Surrey radio studios to respond to a news item they were running.

It was about the funding crisis in children's hospices, particularly Daisy's hospice, Shooting Star. 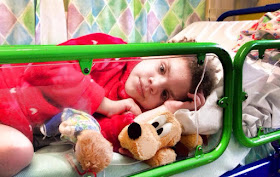 Anyone who knows our family knows how important the support of Shooting Star was, and is, to our story.  How Daisy was referred at 6 months and from that time onward we knew that we had someone walking a path alongside us, caring not just for Daisy but the family as a whole.  Respite breaks away from the home were as important as visits by our hospice at home nurse.  And siblings days and a range of therapies gave our other children their own space.

Daisy was supported by Shooting Star Hospices for 12 years, they were there at the end of her life and continue to support our family now.  The staff there learned the complex procedures needed manage Daisy's care so that I could get a break, they worked in close partnership with the palliative care team to provide a joined up plan, they were there to catch us when our family dynamic fell apart and Daisy's daddy was diagnosed with terminal cancer.

This is why I get up on my birthday and speak on the radio.  This model is unsustainable and it's indicative of a huge problem in how we support and care for all families caring for children with the most complex needs in this country.

Children's hospices are not funded by the government.  OK, well I'll qualify that, children's hospices receive minimal guaranteed funding from central government sources, in Shooting Star's case this amounts to 10% of their income.  The rest is made up from donated funds; from coporate sponsors, from people running marathons, from volunteers shaking the collecting tin.  Year in year out children's hospices have to raise millions to fund services that are increasingly reaching breaking point.

On Monday Shooting Star Hospices announced that they would halve the respite care they are currently offering and support only those children who were close to end of life.  Last week Acorns Children's hospices announced that they are planning to close one of their sites as there are simply not enough cash reserves available for the charity to keep three hospices running.

Medical science is incredible.  Breakthroughs over the past few years have meant that life expectancy for sick children has increased.  Without the drugs and interventions that Daisy received she would not have lived for twelve years, children are leaving neonatal units who would previously not have survived.  But in many cases children are coming out of hospital with the most complex of care regimens; machine dependent, with multiple therapeutic needs and complex drug charts....and this is where it is all starting to break down.

While medical science has advanced and children are living longer, the reality is they are still life limited and therefore need support services for longer.  Support services like those offered by a children's hospice.  When Andy was at end of life , he received support from the outreach team from our local adult hospice, it only lasted for a few days as that was all that was needed and I subsequently discovered that our local clinical commissioning group contract to the hospice to supplement their community based nursing teams and offer palliative care in the community.  No such model exists for paediatric palliative care.  Our community nursing team was understaffed and stretched to capacity.  they provided support during the week, any overnight emergencies had to be dealt with by a trip to A&E , normally via ambulance.  Clinical Commissioning Groups lean heavily on children's hospices to plug these gaps.  Providing respite support for children with complex needs is both expensive and requires highly skilled staff, and hospices simply cannot continue to operate without a guarantee of funding.  Or rather they can operate but they will have to cut the number of children they can support....

Last December the government pledged £25m support for children's hospices, however they have now reneged on that promise, none of that support has been forthcoming and the result is that hospices are closing beds, they are reducing the support they are able to give families.

This is all part of a wider issue in funding paediatric palliative care and social care funding for children with disabilities as a whole.

Excellent palliative care enabled me to make plans for Daisy's end of life, it enabled me to give her a good death but this was provided through a combination of voluntary and commissioned services and we were lucky, the postcode lottery meant that we were supported by a hospice able to provide the level of care Daisy needed.  I fought hard for the continuing care package that was needed to keep Daisy at home and out of hospital, but even with support I was on my knees trying to juggle the complex medical regimens with caring for my other children , and subsequently for Andy.

Everything is a battle, it's a fight.....and it's a symptom of the lack of support and funding across the entire sector.  Not only are children's hospices struggling to provide the care needed for an ever increasing number of children, for longer and with the most complex of medical regimens, but those families are also not supported by commissioned community-based services in order to care for their child safely and away from a hospital ward.

I was terrified that I would make a mistake that could cost Daisy her life. I was administering drugs on my own at home that would be double-checked on a hospital ward, I will never forget the moment Daisy had an anaphylactic reaction to an intravenous antibiotic I was infusing, when I was alone in the house....

The Disabled Children's Partnership (a coalition of more than 60 organisations campaigning for improved health and social care for disabled children, young people and their families) estimates that there is a £434million funding gap in children's social care.

No wonder parents are on their knees, the hospices that they turn to for support are finding it increasingly difficult to care for all of the children needing help in their area and children's social care services in the community are massively underfunded.  The ripple effect as always reaches far and wide.  It's about families, my other children only had one chance of a childhood , this was almost my mantra when I pleaded my case for extra support to keep Daisy at home.

I was lucky (oh the irony), when Andy was diagnosed with cancer, extra support was put in place, and we had the hospice there to provide that all important safety net.  Without that support?  Would Daisy have lived for so long, would we have been able to spend as much time at home together as a family, would I have been able to hold my husband's hand as he took his last breath knowing that my disabled child was safe and cared for?

So this is why I will never turn down an opportunity to talk about the importance of funding for paediatric care and social care.  We are failing our most vulnerable families.

Next week is Children's Hospice Week.  Together for Short Lives, the children's hospice and palliative care charity,  will be continuing to highlight the fact that the government has reneged on it's promise of funding for Children's hospices.  In addition , The Disabled Children's Partnership continue their campaign to address the shortfall in children's social care funding through their #GiveItBack campaign.

Those of us caring for the most complex children face a battle every day to keep them alive, we shouldn't have to fight for the services to support us.