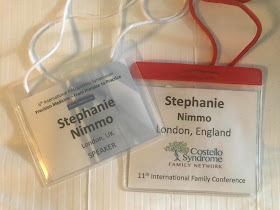 "Find your tribe", it's the advice I give the many parents of children with additional needs who contact me.  It doesn't matter if you child has a confirmed diagnosis, you need to find people who "get it", who understand what it's like to live 24/7 with a child who has taken you for a ride on the extreme parenting roller coaster.

We were lucky (I'm ever the optimist), Daisy received a confirmed diagnosis of Costello Syndrome when she was 6 months old.  At the time she was one of the first children in the world to be tested for the sporadic mutation on the hras gene which causes the syndrome, at the time we were told that it was so sporadic the chances of having a child with Costello Syndrome were 1:1.25million.


I found myself on google and came across the Costello Syndrome Support group, and I found my tribe.  I found pictures of children and young people who looked like Daisy, so much so that it was as if they were cousins.  Which is what they are, children and young people united by a common dna, slightly flawed on one minute strand, that gave them similar characteristics, a familial resemblance.

It was great to chat to other parents, even though it was clear that Daisy was re-writing the book about the progression of Costello Syndrome.  That was tough, seeing other children growing out of feeding issues, responding to surgeries, developing in the Costello Syndrome way while Daisy didn't seem to follow the norm.  But despite that to know that there were other children who looked like Daisy was comforting.

In 2007, the year before Daisy started to really deteriorate and develop total intenstinal failure, we managed to get out to the biannual Costello Syndrome family conference in Portland, Oregon.  It really was a family reunion, not just for Daisy to see other children who looked like her, but also for her siblings to meet other siblings.  It was just so wonderful to be with lots of families, from all over the world, all caring for children and young people with the same beautiful big smiles, funny hands, curly hair and strong as an ox in the face of adversity constitutions as our own little girl.

I remember when we were first told that Daisy might have Costello Syndrome, looking in disbelief at the pictures I found on the internet, there was no way that my child could look like that.  But among the many, many things Daisy taught me was to see the child not the condition, when I was in Portland I didn't see children with dysmorphic features, the horrible term used by the geneticists.  Instead I just saw beautiful children just like my beautiful girl.

Over the years with Daisy I found many tribes; The TPN support groups, hospice groups, special educational needs groups, but none felt like family as much as the Costello Syndrome group.

Together we all shared the trials and tribulations of our complicated lives, friends all over the world, united by the hras gene mutation.  We cheered when our kids achieved milestones, we cried when one of our family died.

And then Daisy died.  The outpouring of love from my special family sustained me during those dark days when I was just numb with pain.  The year she died was also a year for a Costello Syndrome family conference, my heart was lifted when I received pictures of my friends lighting a candle to remember Daisy along with all the other Costello Syndrome brothers and sisters who had died, she was not forgotten.

Earlier this year I was invited to attend the 2019 Costello Syndrome family conference and speak to families about my experience caring for Daisy and what she taught me.  I was also invited to speak at the International Rasopathies Symposium which was running at the same time.  This is the medical symposium bringing researchers, geneticists and clinicians together to share the latest research findings on the group of diseases called Rasopathies which fall on the ras gene pathway, of which Costello Syndrome, caused by a mutation of the hras gene, is one.

As the conferences were being held in Baltimore I decided to combine work with pleasure and took Jules with me for an extended holiday on the East Coast.

After a week exploring New York City and Washington DC we arrived in Baltimore and as we neared the conference hotel I braced myself.  I knew this would be a very different family reunion, a bittersweet one where I was the only bereaved parent in attendance.  It was joyous to see our friends again, to meet new families I have only met online and most of all to meet up with the children and young people who all shared Daisy's features and gene mutation.

It was hard, and at times I had to take myself away because it was so emotional but most importantly it felt like coming home to the best family reunion.  Where we fondly remembered Daisy and shared stories of so many of the children who were no longer with us.  I had worried when Daisy died that I would lose that connection but it was stronger than ever.

I spoke at the family conference and shared how being Daisy's mum had made me the person I am today, what she taught me and continues to teach me.  And then we spent time remembering all the children who were part of our family and are no longer with us....it was beautiful and poignant. 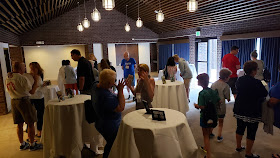 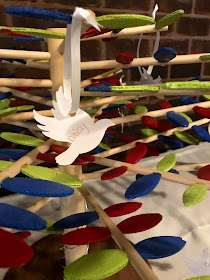 I spoke at the medical symposium a couple of days later, sharing how I had gained an extensive medical skillset and how I was using my experience to improve doctor/parent communications in paediatrics as well as helping people engage in difficult conversations around their child's care.  And I was so moved when several doctors came up to me afterwards to thank me for my words, that they needed to hear them and be reminded why they do what they do. 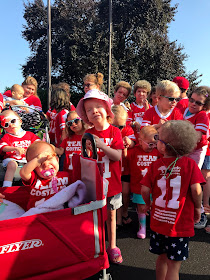 Our Costello Syndrome Family support group is no different to any other family; it has its characters, it's quirks and it's occasional arguments and infighting, but there is strength in numbers when it comes to rare diseases.  The power of the group to influence the research taking place into the syndrome, the exciting prospects of gene therapy and new interventions.  For those of us who are bereaved or who have children too old to benefit from all of this we are still excited for our younger members in the hope that their lives will be changed by the medical advances.  And we look with respect to our "older" members, those who lived for years without knowing what had caused their child's disability and illness, who lived without the knowledge that is benefitting others, who still shared their knowledge for the benefit of the whole family.

Daisy is no longer here but the Costello Syndrome community will always be my family, they are my tribe.

If you have a child with additional needs, diagnosed or undiagnosed, find your tribe, find the people who understand, they will be there for you and you can be there for them.  A family united by adversity and strengthened by love and acceptance. 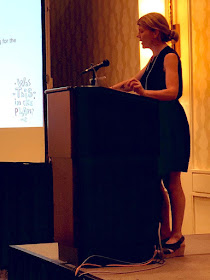 I'm dedicating this post to Ansley (aka Diva Ballerina), a little girl I got to meet at long last at this year's conference having only previously known her online.  Ansley got to meet her family, in many ways she was the star of her final, farewell show.  She, like Daisy had many complex issues and was severely life-limited and like Daisy she chose her time to leave us, just days after our big family get together in Baltimore.  She joins her brothers and sisters united by a common gene mutation, we remember each and every one of them. RIP.